Meriç Hızal "From My Autobiography" 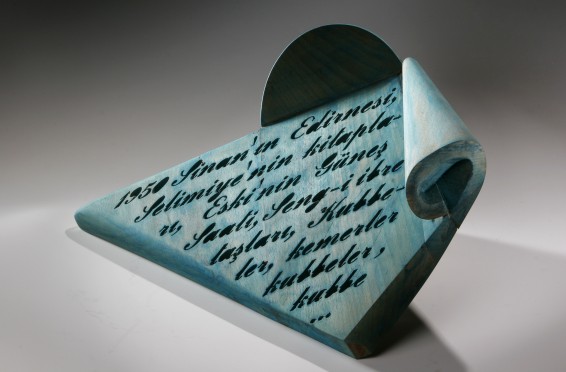 Meriç Hızal “From My Autobiography”

LET’S PUT OUR THINKING CAP IN FRONT OF US!

In the exhibition catalog of Is Bank, Prof. Dr. Semra Germaner introduces Meric Hizal as “An artist searching, questioning and aiming to base her art on bonds that she tries to establish with life.”

She explains her sculptures in the exhibition at Mine Art Gallery: “We relive what we lived in every decade. Why, what do we do, what should we do to get rid of these unwanted repetitions? I turned to my autobiographical work again. For me, art is a journey to myself, a way to find myself, creation. Sometimes confession, even regret. In this work, with reference to my own life, I wanted to make a comparison between individual-social life, in a way, i wanted to examine my life period again. Addressing to collective unconscious, forcing memory, I wanted a work, have it said ‘What to do’. It is said that human memory

is forgetting disabled, and individual memory goes back to 30 years the most. Yet, I remember much older events in my mind, probably I do not want to forget them and not cause anyone to forget. They must be documented because of that, they must be inscribed on stone, carved from metal. Just like the remainings of my country’s ancient civilization to us.  I needed epigraphy to pour my hearth out. Not just for the very meaning or textural contribution, but for the secret aesthetic pleasure derived from the trace of man.

Dalian Maya, in her article in Shalom newspaper, described these works as follows: “By going inside, sitting on top of the artwork and turning it to a life memory. And Soma miners who passed away… and their children… child abuse… Many vicious adjectives give pain to our hearts in so far as the artist’s heart… Istanbul… Daily life. Questioning of life, whatever about man, but perhaps whatever the most hurts people’s heart is turning into a statue in the talented hands of Prof. Meric Hızal. Perhaps to give a message to society, but mostly to treat her soul; because one can only heal other’s heart when s/he heal his/her soul first.” This phrase is exactly as what the artist try to explain and as Ülkü Uluırmak Alçora expressed in Hürriyet Gosteri News. “We have to avoid to forgot. It is the most important task on all of us, it is the most important RESPONSIBILITY… First to be shocked, then to give a shock… to be aware of individual responsibility in society. TO NOTICE…

Here, we subject to an artist who is aware of this. Starting from her own private life, we are faced with the artist’s sensitivity evaluating the phases she passed through very well. Formed object (hat) gains a special meaning in relation to the subject. From the hat that Atatürk wore for the first time on 25th August 1925, to the common skullcaps inevitably let people think.”

Each of the works in the exhibition consists of two elements. Stone pieces are in real newspaper size. As Doğan Hızlan stated in Hurriyet Newspaper emphasizing that – an artist has a side, and art has a social function.- The tablets justify the idea of Hızlan as Turkey’s diary. They are consisting of the abbreviated summaries of the surprising news on sociological, cultural, political issues in Turkey that she collected by investigating the media for a year. To describe the indelible impression, they are carved on stone by drilling. Wooden works in geometric representation are the unwearable replicas of her hats that she wore in different times. They are like a stance, or the symbols that identifies the perspective of its year, a sort of memory object. The forms inviting the viewer to show empathy and bearing the style, color, architecture, climate and family elements from the cities that she lived in like Edirne and Istanbul.

Zeliha Burtek describes these works in Yapı Magazine as: “Wooden statues of the hats that she loves to wear symbolizes her life, and the stone newspaper tablets outlining the life in Turkey in those years… 12 autobiographical compilation. Spot information about what she lived, all of them are visualised with stone and wood materials. In the writings on stone, there  are the effects of her interest of travel, the Anatolian tradition, also her love of archeology. But she sees the objects in a geometric system and visualised them in that way. For instance, beret that she wore in the first days of the academy, now combines the space-dome-architecture relationship… Hızal, in her works, lets us to think that sculpture is the basis of life before it was considered as a way of art. While the trio of material-form-concept goes together, Hızal includes living spaces and ignored topics to her sculptures. The interesting point is that the priority of the subject matter passes over via the constitutive role of geometry, and turns to a common expression in search of geometry.” She also shares the same principles with her students at Işık University. As it is written in the pediment of the Temple of Apollo, an artist should primarily self diagnose, should be honest.

According to Burcu Pelvanoğlu, “Meric Hızal’s sculptures are primarily form and shape. But these are the sculptures to let people think something, to draw an analogy with something, and to create a metaphor. “

The theme of time that she composes with metaphores is always in her works as sometimes changing, transforming or ongoing light motif. The selected works for the exhibition titled “From My Autobiography” are the landmarks of her personal life. The years 1945-1949 symbolize the child impressed by the nature, architecture and stones in Edirne, 1950-51 symbolize hectic life cycle, 1962-63 symbolize hopes and responsibilities, 1973 symbolizes her greatest passion, demolition-construction, 1983 symbolizes the deep longing to her son, and the year 1993 symbolizes her freedom. By making comparisons with the events occured in those years in her country, she also does self confrontation. When the years 2006-2007 come, these confrontations redound to hats representing herself. And at the end, she confesses her silence in her way like conjugation, and by letting audience read what is written and by let ting them repeat, she is questioning our silence and quilt. In Hürriyet Gösteri, Sanem Eyigün says that “the exhibition is compleated with the addition of the newspaper tablets which includes the events that she (we) can not prevent, that she remembers, and the events which gives her a pain. It is calling the audience to put their thinking cap in front of themselves and to do self confrontation.

This template supports the sidebar's widgets. Add one or use Full Width layout.